Since Mike had to travel for the next few days and my writing buddy was horrified by the idea of going hunting with me (my invitation startled her speechless), I was forced to make a decision. Either give up on a perfectly good evening of hunting (my morning was booked), or go by myself. I realized—as I was making it—that it was a foolish decision. My internal mother-voice was screaming, “Don’t be a moron! What do you think you’re doing?”

But I had to do it. I had to see if I had the guts to go it alone, just me, my pack, and the elk-slayer. I’ve recently found myself wondering about age-related things, like, when was it that I stopped working on my handstands? I used to be pretty good at doing them. Sure, I may be 55, but Jack LaLanne was doing his insane workouts until the week before he died at age 96! Yes, I had to go hunting by myself. I would only be out for a couple of hours, and I would head home before the sun set. Maybe I would even try a handstand when I got home.

Halfway up the rocky, snowy road I started to get nervous and ate the third of six “fun size” Snickers bars I would consume just getting to the trailhead. Although I probably should have lost several pounds with all the hunting and hiking I’ve done these last couple of weeks, I’ve used the increase in energy expenditure to justify my over-indulgence in the chocolaty treats.

In any case, my “what ifs” were going into overdrive. What if I get stuck? How would I turn my 4-Runner around on the steep, narrow, icy trail? What if my brakes won’t work on the way back down? I had myself worked into a tizzy and almost turned around at a wide area on the ascent, but I couldn’t give up that easily. With a half-mile to go before I could hunt, my tires spun in a rut. “Shit,” I whispered, as if I would scare away a potential target if I had said it any louder.

I was able to back up—Phew!—and decided I probably shouldn’t drive any farther. I parked off-trail and geared up. “Shit,” I whispered again when I realized I had left my gloves at home. Alas, all I could find in my normally-well-stocked vehicle was a pair of blue rubber-coated garden gloves. “Perhaps this is telling you something,” my mother-voice whispered. I ignored it and stuck the silly gloves into my pocket.

The surge of adrenaline I experienced when I loaded the .308 surprised me, and for a brief moment I thought I might have to rush to the woods to unload, um, the Snickers bars. The feeling passed, however, and I started down the slippery trail with the stealthiest steps I could manage. I saw many tracks crossing the road. Bunnies. Squirrels. Birds. I couldn’t remember what mountain lion tracks looked like, but I was pretty sure I didn’t see any of those. 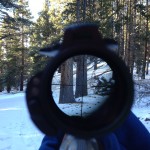 I stopped frequently as I maneuvered down the trail and practiced a sighting drill my friend John taught me. Look at the target, keep both eyes open and on target, bring the weapon up so the scope is in line with your sighting eye, and voilà! Ready to fire! I got better and faster each time I practiced. That sitting squirrel had no idea how cute he looked in my crosshairs. 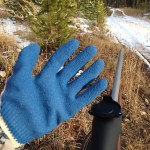 1, I settled down in a spot with good visibility in several directions. The blue rubber gloves proved to be most unsatisfactory, but I had grabbed a couple of expired hand-warmer packets from my vehicle and they provided a bit of heat.

For the next half-hour I sat in silence as the sun settled into the trees. I knew there would be no reckless herds of elk wandering across my path with “Shoot me!” signs on their sides, and if there had been, I probably would have shot pictures. What was I thinking, hunting alone? 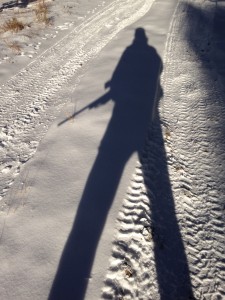 I brushed the snow off my butt and started back up to my vehicle, practicing my aiming skills every few minutes along the way. I could have continued to hunt for another hour, but I wanted to make the drive back while there was still some ambient light. I couldn’t resist taking a snow-selfie. Roger Miller’s song “King of the road” played in my head when I saw my impressive shadow on the snowy surface. It was better than my pesky mother-voice.

When I spotted my vehicle, I felt like I had accomplished something. I had overcome my fear of doing something “risky” at my middle-age, and alone.

The rising moon and setting sun were the spoils of my hunt. 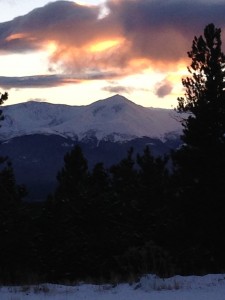 I took my time driving down the mountain. When I got home, I tried a handstand. Next time I won’t use the door. Oh, and don’t tell my mother. 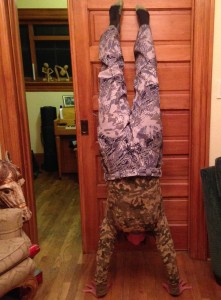