The day after I was auctioned off as one of the “Celebrity Golfers” for the Saint Vincent Hospital Fundraising Tournament, I cheered on my California brother-in-law as he began his first Leadville Trail Marathon. I’ve decided this race marks the official first day of crazy tourist season in our sleepy little town, and I’ve been contemplating lately what it means to live in a tourist destination. 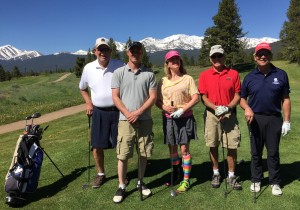 a teen, but they were willing to believe in me. We and hosts of others were there to support our hospital, and the day made me happy and proud because I realized I now live in a place where people often set aside their own agendas to do something good for others. Some of us were once just tourists to Leadville.

I realized my happiness of late also stems from the fact that I used to grouse about the lack of local cultural events around my new turf, but I can’t do that anymore. Nearly every week we can choose between free author talks, free plays, poetry readings, music jams, art gallery events, Steampunk affairs, movie nights “and MORE!” We have two libraries with two enthusiastic library directors continually on the lookout for engaging, entertaining guests. Our tourists are often unaware of our cultural richness, focusing more on the glorious mountains we’ve come to take for granted as our daily backdrop.

Many of our tourists also arrive with the conviction that Leadville is no different from Mayberry R.F.D. and that since we’re so small, we mustn’t have many laws. We already see them stopping in the middle of the street to take a photo, driving the wrong way down one-way streets and stepping off sidewalks as if cars haven’t yet made it to this elevation. But I’m pretty sure even I did some of those things when I was but a tourist here before making the major move eight years ago.

This makes me highly attuned to the locals (and I’m one now) who are warming up their grumble-seats, ready to launch complaints about having to wait a full minute or more to turn onto Harrison, or having to drive a whole four blocks to get around a closed section of road for an event, or *GASP* having to walk as far to shop in one of our stores. But having lived on the east coast for most of my life, I laugh at the idea that waiting a breath before crossing a road or driving five minutes out of my way is an inconvenience worth mentioning. I suppose everything’s relative.

Yes, I was once one of those crazy tourists the locals complained about. Now I’m Leadville Laurel, local author and occasional (self-proclaimed) celebrity. Does this mean I’m suggesting we want more ex-tourists like me deciding to move here? Call it hubris if you will, but heck yeah, I am. I’m asking you to consider how the next “gaper” you curse at because they’re slowing you down as they gaze at the history and beauty surrounding them—wondering how they might capture even a piece of it before heading back to their traffic jams and heat—might be the next butcher or baker or candlestick-maker who decides to make the leap to Leadville.

I’ve lived here long enough now to know one of the favorite complaints voiced by new and old residents alike, and for whatever reason, I hear it more frequently during tourist seasons. I’d really love to be the one to banish it forever from our small-talk. Barring a truly cataclysmic geological event, Leadville will never become “the next Breckenridge,” so could we please stop beating that mythological horse? We could, however, become a town that supports not only its current population, but a growing one. We could be a town in which every shop is open year-round, a town in which our second-home-owners make their getaways here their first homes.

It’s my belief that we cannot remain a sleepy little town for much longer lest we stagnate or die. So let’s laugh at our tourists rather than curse them. Let’s try a tad more tourist toleration, or at least suppress our sneers. Let’s understand the magic we know they feel while driving or walking around our town, be it the wrong way or in the middle of the street. Let’s attend and support our cultural events and shop locally whenever possible. Let’s encourage and support those who seek to keep Leadville alive. Let’s start seeing our town through the eyes of our tourists again—through awestruck, smiling eyes.

Spot on! as the saying goes.

Does “crazy” modify “tourist,” or “tourist season”? This is the question! (Although I think I answered it near the end of the blog!)
Thanks for visiting!