Lost my funny bone
“Signs, signs, everywhere there’s signs”
But that’s about all

Yup. If finally happened. I lost my sense of humor this morning.

Mike and I were back where we had hunted last weekend, where I had silently cursed the endless inclines, where a friend—just the day after we were there—harvested an elk. “Harvest: to catch, take, or remove for use.” Sounds far more acceptable than “shot,” eh?

Anyway, we both felt like this would be our lucky day. It was time, I reasoned. Sure, I knew statistics were against us and only about 25% of hunters successfully filled their tags each season, but we had been doing more than due diligence!

The day was clear and not too cold. I was surprised by the comfort of the pack on my back and the rifle in my hands. Day after day of putting in the hours was paying off.

After almost two hours of sleuthing, nature made an insistent call.

“I reeeally need to go!” I whispered to Mike after peeling off my top jacket. With the sun up, the day was growing warm.

“Did you bring paper?” he whispered back.

When I finished—one of those magical experiences that didn’t even require a stick!—I felt light on my feet despite the weight in my pack, which felt just a bit weightier than when I had donned it earlier. Nevertheless, we were back to sleuthing and still felt confident.

But hours passed. Yes, the day was lovely. Yes, I was spending time with my husband. And yes, regardless of the day’s outcome, I was in a place with no laundry to fold, no dishes to wash, no bills to pay. So why did I start to lose my sense of humor?

So I really tried not to resent his suggestions and his ability to climb steep hills like a mountain goat. But it was becoming more difficult. My head was telling me, “He wants to find an elk as badly as you do, so pull up your big-girl panties and drive on,” but my body was screaming, “Hello! I’m sending you signs! This is hurting me as much as it’s hurting you!”

Something ran across the crest of a hill when I was about to throw down my weapon and pout. That was all it took to get me moving again, even though Mike and I both agreed it was probably a deer.

Into the fifth hour of beating around the bush, however, in addition to the stabbing plantar fasciitis in my left heal, I started feeling like I was developing trigger-elbow in my right arm and stock-wrist in my left from holding my weapon at-the-ready for so long.

Five hours of being “at-the-ready,” of anticipating the moment I would crest the final hill and see a whole herd of elk just chillin’ on the other side, of studying each step before I took it, suddenly took its toll.

I used to think I might actually have a moment of hesitation before pulling the trigger if I were ever to get an elk in my crosshairs, but no more. I was ready to scream, “Make my day, wily beast! Make my frickin day!”

“My fun meter is pegged,” I whispered to Mike, and he agreed that it might be time to head back home for something to eat and maybe even a nap. We’d try again in the evening.

It seemed to take forever to get back to the car. Screw these stealthy steps, I thought, and practically stomped down one of the many hills we had earlier climbed. When we were almost out of the woods, we came across the elk bones we had seen frosted with snow the first weekend of hunting. 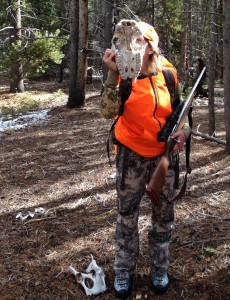 “What are you going to do with it?” he asked.

“Probably hang it on a wall,” I said. And with that, he wrapped it in a plastic bag and carried it out for me. I packed away my petulance.

After a monster-sized brunch and a snooze, we followed a friend to a place he knew had roaming herds, and although we came home empty-handed again, the location was hill-less and I was happy. We’ll go back out tomorrow because…

There were lots of signs!