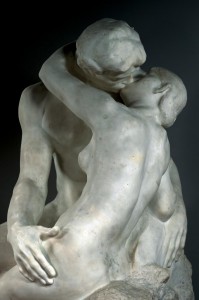 Everyone remembers their first, right? Mine was David. I didn’t know it at the time, but he was the very model used by Michelangelo for that famous piece, so to speak, that stands contemplatively gazing down the halls of the Loeuvre. He was such a stud muffin that I felt compelled to taste his lips, or any other part of him that might happen my way. And so I set about to hasten the inevitable. As he rode his bike past my house one day, muscles pumping, body glistening in the sweltering August sun, I called him over. He came, hesitantly, and stopped ever so close to me. I could hear his heart beating as he assessed me quizzically. I told him I needed to share a secret, and that he would have to come closer. As his face came closer to mine, I closed my eyes and did it—I planted a big juicy one smack-dab in the middle of his forehead, which sent him careening away on his bike yelling, “Cooties! Cooties! EEEEW, I got cooties!”

So O.K., he wasn’t really the model, I didn’t actually notice the presence of any muscles on his 7 year old body, and I’m quite convinced now that it was my heart beating feverishly in my 4 year old breast; but hey—I knew what I wanted, and I went for it. Had I kept my eyes open, I may have tasted those fresh lips; but clearly, David was not ready for the lusty passion that drove me to my fateful deception that day. Yet despite his clamor, I know that I saw a furtive smile cross his face as he looked back at me standing on the sidewalk (I wasn’t allowed into the street or I may have chased him down) with a smug grin on my red, freckled face. Yes, I had a secret all right—A kiss is a wondrous thing, and ahhh, the spoils of victory are sweet!

It was actually a kid on Norfolk named Andy, and it was in front of 44 Helen Rd! What a little hussy I was!