Week 2 of our road trip is even better than week 1. Our sleep schedule is increasingly more like Ranger’s and each waking moment is an opportunity to explore extraordinary new scenery. The simplicity of our routine is invigorating. I don’t miss home at all.

Our only frustrations are with the occasional drivers who slow down when the road is not hairpin straight, or truckies who won’t pull over with a mile of traffic behind them.

“What are you hauling? A black hole?” Mike asks one driver when we can finally pass safely. The driver doesn’t hear him.

“Panguitch,” I read on a sign. “I’m hungry. I’d like a peanut butter and jelly panguitch, please.”

But then we see an even better sign advertising “HO-MADE PIES.” As I’m fairly certain 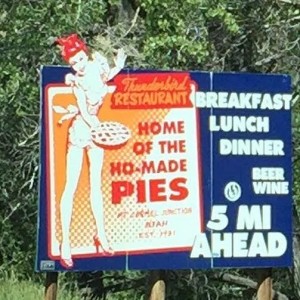 they’re not gluten free, we pass on the Ho-made pies. “I once was a tart, but now I make them,” I say, and the pin-up girl on the sign agrees with me.

Debris, my iPhone, takes us on a circuitous route to one of our destinations, adding close to an extra hour of driving, and at some point I tell her to “stop navigation.” As soon as I finish my command, Mike adds, “and stop being a such a douche.” He’s angry at Debris’ faulty directions.

My phone responds sweetly with, “Okay, Laurel, here’s what I’ve found for stop navigation and stop being a douche,” and Mike and I burst into laughter. We cannot believe what we’ve just heard. Mike wants me to click on the “How can I stop being a douche” link, but I’d rather look at the scenery. 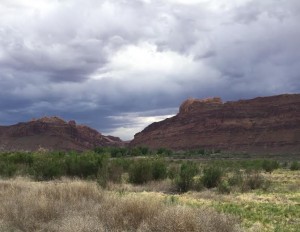 For hours we pass open land for as far as we can see and laugh at people who talk about the threat of overpopulation. The contrast between what we are seeing on our travels and what we know about those who live on top of one another in big cities is nearly irreconcilable in our minds.

Along a particularly rough stretch of road there’s a sign warning of an upcoming bump and we figure if the bump is worth noting, it must be a doozie. We maneuver it just fine, and then there’s another.

“The bumps. Because that would make them bumpkins.”

This is how many of our conversations go.

We finally make it to our campground near the North Rim of the Grand Canyon and notice our slight stature amongst the other campers, something we observe everywhere we stop. We clearly have the smallest travel trailer in the whole place. We’re surrounded by Death Stars, and Mike—who is not a singer—never fails to hum the Star Wars tune whenever we pass one on the road.

I count over 45 different names on the various mobile homes, all promising something special. Attitude, Beaver, Freedom, Fury, Hideout, Independence, Jazz, Komfort, Puma Unleashed, Voltage, and Wildwood are some of my favorites.

“I could see trading up in a few years,” he says, checking out our neighbors’ rigs, and although our trailer feels palatial after years of trips in the truck camper, I can see a time when we might need just a little more space. Like when we’re on the road for months, or when we’re taking potential grandsnarfs on adventures.

Our neighbors at one campground, owners of a Death Star, tell us they call their trips 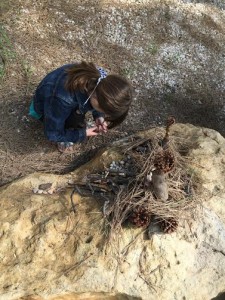 “Glamping.” The dad is a Marine, and like Mike, has decided he’s paid his dues roughing it for long enough. Their daughter, a serious 7-year-old, is engrossed in making a fairy fort out of pine needles and cones and sticks and stones. She is methodical in her creation, and I can tell she’s happy I’ve noticed her effort.

We decide to traverse one of the longer, steeper trails at the canyon and agree to do a timed out and back. I know Mike wants to cover as much ground as he can, and I want to stroll and take photos and chat with people, so we decide we’ll both turn around at the 90 minute mark.

“Don’t get lost,” I tell Mike, and he knows I’m joking about an experience on our previous hike—a simple half-mile round trip out and back to an overlook—when a group of Harley riders (I’m assuming they were Harley riders as they were all decked out in Harley leathers) asked us the way back to the lodge. We suppressed our urge to ask if they were joking and pointed to the only possible way they could walk.

So off we go down the steep Kaibab trail, which smells of mule dung punctuated by an occasional blast of fresh pine. But for the noisy swarms of metallic blue-green flies—why are they so beautiful?—on the freshest piles, they’re tolerable.

After I overcome my concern over several small children approaching an overlook with no fences and a rock slab slide into the void—they’re not my children and their parents seem to be watching them—I continue down the trail to a quiet piece of shade and sit in the cool silence, breathing in the canyon breath. A haiku presents itself:

During my turnaround hike back up the path a canyon-red butterfly outlined in white dips and turns and climbs over and over, a little dance just for me.

On our way to our next venue I watch Mike surreptitiously as he drives, this man who has made my life one huge adventure, and know I could travel the world this way with him. I notice for the first time the tin foil hairs interspersed with the brown ones on his forearms sparkling in the sun through the windshield and I think about the hairs on my own arms that now stick straight out as if trying to escape, and my eyebrow hairs that are growing willy-nilly like Einstein’s. I plucked one the other day that must have been an inch long, half brown, half gray, wholly twisted. 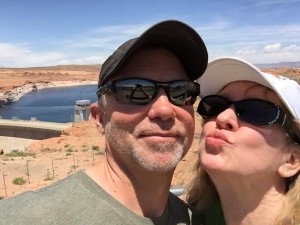 I notice the gray stubble on Mike’s chin, something I rarely get to see, and it makes me wish I had my tweezers handy to pluck the persistent stray hairs that grow faster than a startle reflex on my own chin. Mike doesn’t like his facial hair, but he forgot to bring a new blade for his razor. I don’t tell him I’ve got extras. I like to see a little scruffle now and then.

We listen to a radio DJ who starts an excited expression with, “Holy …! Don’t worry, folks, I’ll never curse on the radio, so if you’re driving home with the kids now, you’ve got nothing to fear. This next song by 311, All Mixed Up, is one of my favorites. I mean, these guys work their asses off,” (emphasis on the asses). 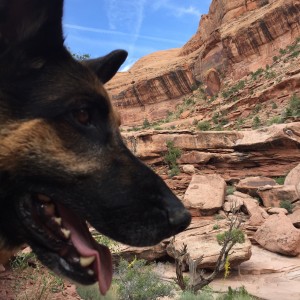 We’re a little quieter on our final drive from Mesa Verde to home, our last day of vacation. Sure, we laugh at the “Nothing Satisfies Like BEEF” sign and make the obvious pork references. It’s not like we’re somber or anything. And we’re truly pleased by Ranger’s response to our truck to trailer to truck routine these past two weeks. He’s always ready to jump into or out of whichever door we open, and after only a few minutes of whining in the truck, he settles down and does what he does best: sleeps.

We know we’ve seen only the tiniest fraction of what our country has to offer, and every place has been our favorite. Driving back into Colorado—after the mandatory donation to the Navajo Nation at 4-Corners where vendors of silver and turquoise surround you, entertained, no doubt, by the antics of tourists splaying themselves across the geographic marker—we are grateful once more to be living in one of the scenically most spectacular states.

Bouquet upon bouquet of orange, white, yellow and purple brighten the roadways, and over every rise there’s another castle or ship chiseled by an unseen sculptor’s hand from the cliffs of stony red earth. I imagine dinosaurs tromping alongside us and pterosaurs gliding from peak to castle peak. And then, the snow-capped mountains rise from flowered fields, and we are . . . 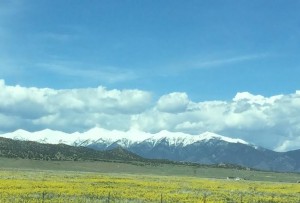