It is with anger, growing frustration and rising blood pressure that I’m distracted from writing what I enjoy writing to compose this rant against irresponsible dog owners. I am so, so, SO sick of having to defend myself and my dog from almost routine incidents involving loose, aggressive dogs.

Just yesterday I delivered a stern written warning to an aggressive dog owner whose dog finally escaped its yard and attacked my dog, and this morning, while walking with my friend along a route we’ve taken several times each week for the past several years, an unsecured Rottweiler ran from its yard and charged us. I think the only thing stopping it from inflicting damage was the atmosphere of noise and confusion that ensued as its owners, a witness, and we—its target—all erupted in shouting from different directions. The same dog had apparently attacked another person two weeks prior.

I had my pepper spray at the ready as the dog circled us at close distance, and fortunately, the dog owners secured it before it made contact.

And then they apologized, right?

Hell, no. They acted belligerently, yelling at us for our reaction to the incident, telling us their dog is “friendly,” and walking away after being told to stay until the police arrived.

And it suggests I should just deal with the physical and emotional damage I endure after coming down from a spike of fight-or-flight adrenaline to my system.

To all those suggestions, I scream “NO!”

“It’s because your dog’s a German Shepherd,” we’ve heard from past aggressive dog owners after their off-leash dogs have charged us, as if owning a German Shepherd is a valid excuse for their dogs to attack. I suppose that was a similar excuse used by the owners of three different loose dogs who charged my friends as they walked their 14-pound Cavalier King Charles Spaniel around the Fish Hatchery recently. I suppose it was because my friends’ dog was too cute.

There’s been talk for years of sterner dog control ordinances, but if we’re all going to continue to avoid the law-breakers, to walk a different route, to veer into the street rather than stay on a sidewalk by a fence we know won’t contain an aggressive dog, to give someone “one more chance” before filing a report, what good will come of sterner laws?

I’m disgusted. I’m disgusted because this is not the first time I’ve been angry enough to write about dog attacks (see Going To The Dogs), and even as I write this—my heart still pounding too hard—I question what impact it will make.

I sent this letter to our local paper’s editor today. I know this issue is not exclusive to our quirky little town, so I have to wonder why we (humans) can’t seem to figure out how not to continually be victimized by them (demonstrably dangerous dogs and their generally aggressive owners).

Clearly, it’s never appropriate to blame the dog. Some people believe there are no bad dogs, only bad dog owners. But bad dog owners can create bad dogs and allow them to behave aggressively around people and other animals. This is bad.

I believe my rights as a law-abiding individual trump (and how I hate to use that word anymore) those of law-breakers and animals. I’m not sure how I’ll respond to the next attack, but it won’t be pretty. For years now I’ve been holding Ranger back and pulling him away from attacking dogs, not wanting him to engage in a fight, not wanting him to experience what it might feel like to sink his teeth into a combatant, not wanting to “ruin” him. 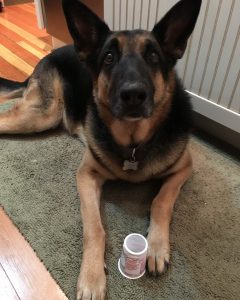 I’m not going to hold him back anymore.