When I was a wee girl, my list of “What I want to be when I grow up” included singing, dancing, drawing, and working as a cashier. It did not include acting.

Mom likes to remind me that I cried a lot as a child, but I don’t remember much crying until I was a pimply teen with low self-esteem. They didn’t have drugs like Accutane back then, or if they did, we were unaware. If I cried as a child, it was probably because of my awareness that I was the funny-looking daughter of five, pudgy and freckle-faced among blonde and brunette beauties of sisters.

My older sisters tell me that I was a cute little “Look at me!” kid, so now I know that my most recent gigs as an actor were somehow predestined.

Two years ago, an acquaintance told me she had a screen play she was ready to film. Half joking, I asked if she needed an actor.

“Are you serious?” she asked, “because you might be perfect for the part.”

I convinced her that my life as an Army officer, a teacher, and a mom qualified as acting experience, and one year later in the fall of 2013, I co-starred (alongside a beautiful old dog) in her short film “Peace Pass.”

The film is a controversial piece about end of life decisions and premiered at the National Mining Hall of Fame and Museum on May 3rd, 2014 to a full house. In true “Look at me!” mode, I arrived stylishly late in my $20 red Goodwill evening gown and blew kisses to the crowd. I like making people laugh, and it was a good thing to do before starting the emotionally wrought film. 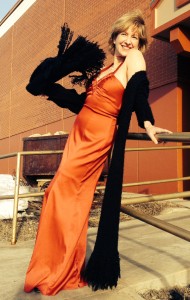 The film ended with sniffles throughout the audience, and the following Q&A session was thoughtful and provoking. My only challenge at the end of the evening was getting my head through the door, full as it was with music from A Star is Born.

Starring in my first official film has left me hungry for more, and although I was given speaking lines as an “extra” in an Audi car short film (shot here in Leadville April 29th), the final cut may not include those lines. We’ll know on Mother’s Day when it is scheduled to air online! In any case, it was a thrill to work with real actors and directors from California.

Yes, I will still write, but I think I might also have to pursue an acting career in my advancing years. “They” all say I’m a natural.