Pearl at the Wheel

“You look cold, dear.” Pearl pushed her jacket onto Frank’s lap, keeping her eyes on the road. It was her turn to drive the ’58 Oldsmobile coupe, Frank’s pride and joy, second only to his wife.

Frank’s proposal nearly 65 years earlier had made her giggle.

“Please be my forever girl, my lovely Pearl! I’ll do my best never to irritate you!”

Pearl had cherished each day since becoming Mrs. Frank Newhart. Her husband had a way of making everything wonderful, even the childless years when she had questioned why he would keep her as a wife.

“ ‘Twasn’t meant for you to take care of anyone but me, my bumblebee! You know you’re my whole worl’, Pearl. Now, give me a hug.”

And with each hug she knew her place in his heart was safe.

She was uneasy behind the wheel of “Ol’ Brownie,” but Frank had already driven through the morning and she could tell he was weary. They drove only during daylight hours now that their vision wasn’t the best. Their last drive south had been hairy, and Frank’s frequent remarks about the “daredevil whippersnappers” on the road had made her reconsider this year’s trip.

“Oh, but the kids’ll miss us! We’ll just take it slow. What do you say? Shall we give it another whirl, my pretty Pearl? Just one more jaunt?”

Pearl could never say no to her Frank. Even when his plans involved doing things she’d never imagined, she trusted he would keep her from harm and expand the small world of her past. And he was patient. She never understood how he could be so patient with her fretful ways.

Frank was a good driver, too, and loved their road trips, but the journey to visit their favorite nephew’s family took days. There was no need to hurry in either direction, though, so she helped him pack the car.

“ ‘Twill be an adventure, my tweety-sweetie-pie,” he told her.

“It’s always an adventure with you, dear. But I think we’ll fly next time.”

They had just passed the “WELCOME TO OKLAHOMA: Discover the Excellence” sign when she stole a glance at her husband. How she loved his strong nose, his wispy silver hair, his bushy eyebrows, and the mischievous grin that always played around his lips.

“How can you tell if he’s happy or sad?” their friends would ask her because his expression never seemed to change, even when Pearl knew he was troubled. She wondered if it was his way of protecting her fragile emotions.

Pearl grasped the wheel and briefly considered pulling over to the shoulder. “These double-long trucks scare the bejeebers out of me. Look at him! He’s taking up half our lane! They should be illegal. Hey, you, pick a lane! Should be illegal, don’t you think?”

Jittery chatter was how Pearl dealt with tense situations. She drove on more slowly, her knuckles white at ten and two. Another quick glance at Frank reminded her how patient he’d been over the years. When he learned she’d be fine once she finished her rant, he’d wait it out, the little furrows on either side of his mouth indicating an ever-present grin like the one he wore now.

“I sure will be glad to see that ‘Welcome to Colorful Colorado’ sign. Tomorrow, maybe. Isn’t it just the funniest? Cream letters on a brown sign. Colorful Colorado. Ha!” She squinted. “This is the worst time to drive, you know, with the sun setting. Maybe we’ll drive through the night tonight. Get home in time for Bridge with the girls tomorrow. Won’t they be jealous when I tell them about the show at The Grand Ole Opry?”

When the truck was out of sight, she took a deep breath but didn’t relax her grip on the wheel. She stared straight ahead, concentrating on keeping Ol’ Brownie between her lane markers. She let the silence sink in.

“Still cold, darlin’?” She pulled her hand away quickly and fumbled to adjust the heat knob.
Tears threatened the corners of her eyes, rolled over her sparse lashes and disappeared in the soft scarf Frank had purchased that morning to protect her from Colorado’s impending winter chill. She wiped the rest away brusquely. Wind buffeted the car and she grasped the wheel firmly again.

“I wish you’d say something, my love. Anything.”

But Frank had nothing more to say. He had stopped talking near the eastern edge of Oklahoma shortly after their last McDonald’s coffee when Pearl took over at the wheel. There were two more states to traverse before they’d be home. She’d have to be careful where she stopped. Maybe she’d close his eyes and lean him against the door. 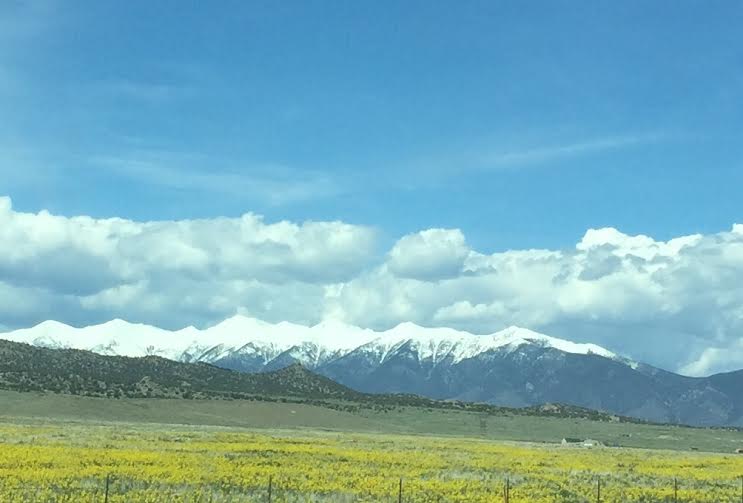