The Leadville Trail 100 (LT100) races fill me with excitement and dread every summer since Mike started competing in them ten years ago. We all have our vice(es), and for Mike, it’s training for and completing ultra-distance races. I’m not sure how many others can claim being a four-time “Leadman” (Google it), but Mike has earned every belt buckle now littering his bureau top.

The Lead Ass Inn (our home, dubbed by my Dad) has been a gathering spot for countless racers over the eight years we’ve lived here, and both friends and strangers from the US and overseas have slept in our beds and on our floors and have been grateful for the availability of our three bathrooms. When we updated the bathrooms in our 120-year-old Victorian—the first update I insisted upon—I told Mike we’d be purchasing the American Standard Champion4 toilets because they advertised the ability to flush a bucket of golf balls. Although I never tested that claim, I’ve also never needed a plumber or a plunger since the installation, and believe me, racers can stress a system! 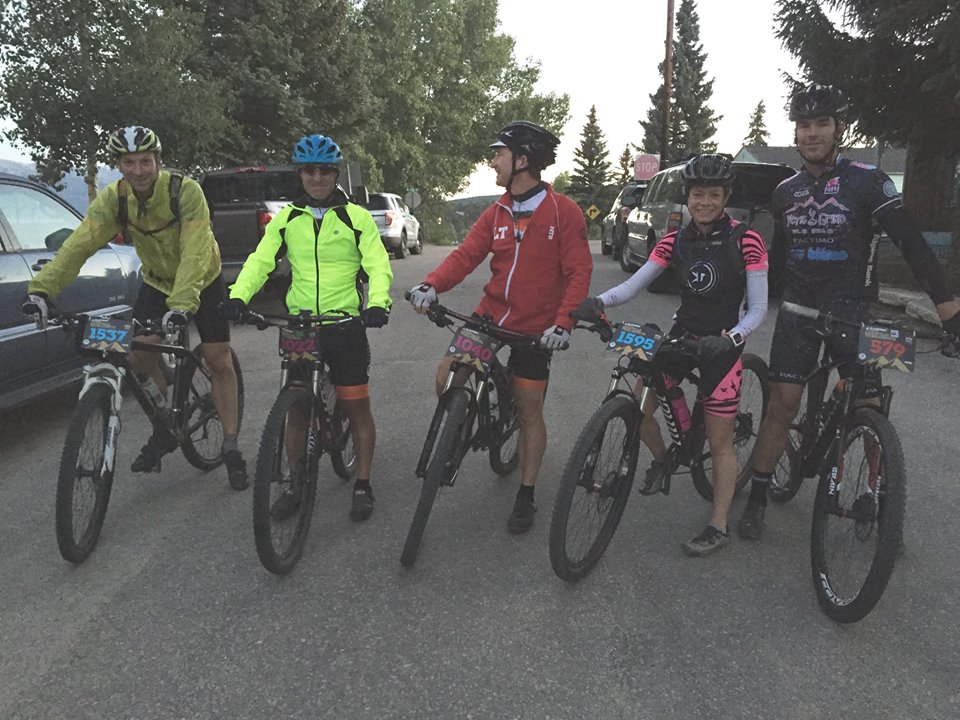 After so many years of participating in the 100 mile mountain bike event, we’ve fallen into an exciting(ly stressful) routine which leads up to my favorite time of all—race day morning. We’re up at 04:45 because we know our regulars and some tagalongs will be ready for their pre-race prep at 05:00. We’ve unofficially adopted the First Descents team (http://firstdescents.org/), and one of their key leaders, Brent Goldstein, and their supporters—Gary Morris, Kevin Kane, and celebrity Ryan Sutter (among hordes of others over the years), begin their arduous day in our home. The vibe is always electric.

This year our group was smaller than average, and from the moment we awoke, we knew this year’s race day would be different. Sure, it was chilly before the sun rose, but it was not nearly as cold as it’s been in years past. Mike handed me his jacket as soon as he got settled in his staging corral (and yes, the similarity to sheep being herded was astounding). He didn’t even start the race with arm warmers. This did not bode well for him.

At mile 40 he was looking great and spent little time at our Twin Lakes support crew station. A refill of fluids and a brief comment about the heat and he was off for the climb up Columbine Mine. But by mile 60 on his way back through, I could tell the heat was whipping him. He actually took a seat, something he’s never done, and was in no great rush to get back onto his bike. It was not the Mike who came blazing through six years ago sans bike saddle (which had torn off on a fall coming down Columbine) and who finished the raced in mere minutes over 9 hours still looking strong. Nope. The heat was draining support crew people. It was brutalizing the racers. Mike was not looking good.

I was worried about him (always my greatest stressor), but I knew he’d finish the race. Mike’s training focus since his first hip replacement surgery three days after last year’s 100 mile mountain bike race has been on biking. He was going to earn the coveted BIG belt buckle for a 10th-year 1,000-mile finish, which is not to be confused with the turkey-platter-sized belt buckle he’ll earn when he finishes his 20th race ten years from now. And let’s face it. Who (besides me) wouldn’t want to sport a belt buckle the size of Texas? My one fear is he’ll need his other hip replaced by then just to carry the weight of it.

Anyway, the day grew hotter and I grew more anxious as time passed at the finish line until finally, I heard them slaughter his name. “And from Leadville, let’s hear it for Mike McChhaaargyouway!” Really? Not only has he completed this race 10 times and completed the whole Leadman series four times (and I won’t even talk about how much money these races cost to enter), as the Lake County Emergency Manager, he has also provided trail support for all of the races for years now. I suppose I should be used to people not being able to say our name, but this really irked me.

The time was 10 hours 38 minutes and Mike looked like death—not even warmed over. I 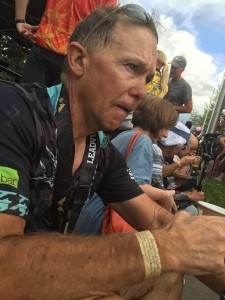 tried to coax him into the medical tent, but he chose instead to dry heave the whole way home. “Grit, guts and determination.” I knew we would not make it to the VIP party at 6:30 p.m.

He was showered and in bed by the time the other racers made their way back to our house to retrieve their belongings. And this was when the dark cloud passed over. Outside on the sidewalk, two women—a racer and her friend—sat looking morose. I went to offer assistance not knowing what was wrong and found out their friend had died during the race.

Mike and I met Scott Ellis and his wife years ago when they were staying at the B&B two houses down from us, their LT100 routine. This would have been Scott’s 19th LT100 finish. “He was in great shape” and was an avid racer. But his heart gave out about 20 miles from the finish. His wife was not here for this race. He was only 55. Mike’s age.

We attended the awards ceremony early this morning because getting the BIG buckle was a big deal and we wanted to be there to support the other racers. I left the ceremony upset for two reasons. The first reason was petty. Yup, they tortured Mike’s name again (they got “Mike” right) and did not have his buckle ready to take home. It bothered me more than it bothered him, so I really should follow his lead on these things.

But I was truly upset because there was not a single mention of the man who perished in a helicopter after falling at mile 80 on the race. Not a mention. Not a brief moment of silence or acknowledgment of the fact that “Grit, guts and determination” can sometimes be fatal.

And so it is that this year’s LT100 race is over. For Mike, it’s another goal attained before an upcoming week of coordinating support for the US Pro Cycling Challenge coming through Leadville this Wednesday/Thursday and for the LT100 mile running race on Saturday (I’m thankful he’s not competing in that one anymore). For me, it’s a sigh of relief that my friends and husband made it through this race with stories to tell.

More on this at: Report of fatality and Another story about Scott

Leadville Today posted this tribute on 8/19/15: Tribute to Scott

…and while I may be vilified in the press for being so “demanding,” I maintain my belief that Scott’s accomplishments should have been recognized before any others at the awards ceremony the following day.