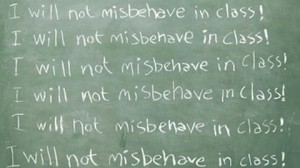 Another school year is ending and our new superintendent is looking for input on yet another new program that will be marketed as “a fix” for our broken school district. Sadly, I was unable to attend the community meeting at the high school where I could have provided my input on both the “Expeditionary Learning” program and the qualities I’d like to see in a new high school principal. Sadder, however, is that I heard attendance was embarrassingly low.

A friend recently asked what I thought about the new program. After teaching both here and at a school in Colorado Springs that closed for consistent poor performance (after trying several new programs), my response was that no program will work until the leaders in our school district open their eyes to one of the biggest problems we’re dealing with in our schools: lack of effective discipline.

It appalls me that the state is not stepping in sooner to deal with this blatant problem. It appalls me even more that parents of students in this district have not been outraged by the status quo that is summarized by the apathetic, “Hey, it’s Leadville, what do you expect?” attitude of our students, and that they have not demanded the resignation of a school board that seems content to throw money at the latest “fix” without addressing the root problem.

How much money will be spent to train faculty on this program in order to see if it will be “a good fit” for our population? I hate to be cynical, but based on my past experiences as a teacher in this district, I’d bet that the decision to implement the program has already been made, and without asking any of our teachers who have tried to tie in the beauties of our surroundings with their curriculum how it has worked for them.

The idea sounds fabulous—and it may even be working at King Middle School in Maine (Way far away from here: Hispanic population=5.7%)—but again, without the ability for teachers to enforce a strict behavioral code—and to be supported by their superiors in doing so—program after program will continue to have our schools in the news as failing our students.

Why not allocate funds for security cameras in hallways and classrooms? How wonderful it would be to have visual evidence of why “Little Johnny” isn’t learning. Why not spend money on a vo-tech curriculum that will serve the needs of the majority of our student population? How about mandatory classes on social etiquette and maturity so our high school students will understand why it’s not okay for them still to be acting like 5-year-olds? I have some other ideas I’d be willing to share—free of charge—to anyone interested in listening.

As for qualities I’d like to see in a new principal—and in those in leadership and teaching positions throughout the district—how about the ability to see a problem and to address it without fear of recrimination? How about the ability to enforce a no-nonsense policy that supports our teachers and allows time for them to do what they’ve been trained to do? How about someone who has the gumption to say no to any number of new “programs” that ultimately only profit companies who neither know nor care about our students?

I don’t know that there’s one reason why large numbers of parents and employees aren’t showing up for these important meetings (though I acknowledge the small percentage who are involved in every decision). Maybe the time isn’t convenient. Maybe we don’t believe that our input will be valued—I have personal experience with that. Or maybe we just don’t care enough to tackle the real problem . . . and no new program will fix that.