Winter comes early to the high mountains of Colorado—it’s already snowing in the 14ers behind our house—so when Mike said, “Let’s go to the lake today,” I donned my water shoes, threw my paddle board in the truck, and off we went. We were both exhausted from a week of racing events (Mike earned the coveted 1,100-mile LT100 mountain bike race jacket), but the day was “seasonably” warm for an August day in most places. We could easily have taken a nap, but didn’t want to miss the warmest day of the year so far.

Did I mention we were exhausted? The lake must have known. Never has it been so serene, so ripple-free-reflective, and we were all alone on it.

We paddled side-by-side for a while, Mike in his kayak, me on my board. I paddled softly, not wanting to disturb the only other creature in sight—a preening Double-crested Cormorant, who stopped to follow our languid glide across his waterfront. The lake was crystal clear to the bottom. I thought I might find lost treasures.

When the glistening bird returned to his task, we advanced on cloud formations so crisp atop the water that the vision disoriented me. “We’re chasing water clouds,” I told Mike. “Another book title.” I really need to start keeping track of all my book title ideas. He smiled and paddled silently.

As Mike’s kayak moved beyond me, I watched the cloud reflections waver until they looked like something from a Dali painting for a moment before the wake from his boat subsided and they were perfect again, more beautiful even than the actual clouds above. I approached their reflections as slowly as I was able. I wanted to stand on a cloud, but they remained always just in front of me.

Easing my paddle from the water behind me, I made a gentle arc before dipping it back in for the next stroke. I watched as the droplets from my paddle made strings of concentric circles that expanded in circumference until they overlapped one another, becoming a chain of wavy Venn diagrams before disappearing into the mirror. I did this over and over again, never tiring of the magical patterns. Water Slinkies trailed my board and nudged me into a trance. Venn diagrams became Zen diagrams.

I sat on my board and floated on the clouds until Mike returned.

“Want me to pull you back?” he offered after we had floated together for a while.

“Sure. Let’s go back and take that nap.” I clipped the front of my board to his kayak and lay on my belly, my ear to the board, and listened to the easy, rhythmic “splash, splash, splash, splash” of his paddle as we returned to where the watchful bird waited. I skimmed my fingertips along the surface of the lake as he pulled me, reveling in the juxtaposition of its satin-soft coolness with the warmth of the sun on my cheek and arms and calves. The clouds had drifted away. 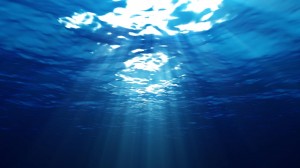 p.s., I took no photos that day, but was inspired by crazy, dreamy, cloudy, rhythmic ideas I’ll use in Waterwight: Book II.