In honor of all you brave souls who made your way around what I hope will soon be a full Turquoise Lake, I am posting the story about the experience I had when I first ran that race in 2011. It’s called “Racing with The Girls.” Enjoy! 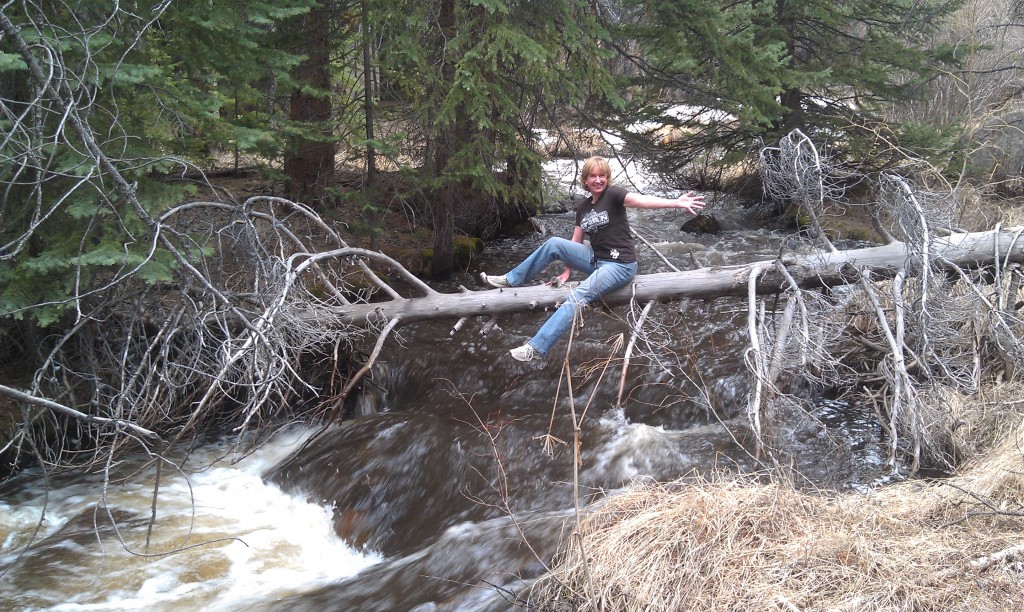 (hoping all this running water will fill our Lake soon!)

Nipples. “Wow! You can see those girls a mile away!” exclaimed Mike, my somewhat protective husband, as I finished dressing for my start-summer-off-on-the-right-foot-race. Although it was not a particularly cold Leadville morning, about 54 degrees, “the girls” felt no fear in greeting a boat ramp full of friends and strangers all gathered to run the half marathon around Turquoise Lake.

Just the day before, Mike had suggested, “Maybe you might start your summer training program with the 5K on Sunday?” But he knew better. Twenty-seven years of watching me “taper” for weeks/months/years before pulling out ridiculous physical challenges had left him with little to say, and perhaps a sense of mild amusement. No, I would do the half marathon. It had been six years since my last one.

“When was the last time you ran?” he persisted, genuinely concerned that I was about to make a big mistake. Turquoise Lake is, after all, situated at an elevation of 9,600 feet, and the race includes climbing to 10,700. “I’ve been running on the treadmill at school a couple times a week,” I fibbed. Although I had clocked a handful of two mile days earlier in the year, the most strenuous thing I had done recently was make it to school on time every morning, an easy half-mile walk.

My teacher friends were also in on trying to change my mind; after all, it was Friday night, the first night of summer vacation. The ring-leader handed me a rum and coke, a tall one, “Mostly coke,” he lied. But I knew him better than he thought, and confirmed the lie with my first sip. Nevertheless, the summer beverage went down smoothly and finishing it, I decided it would help me sleep before the big event. It did.

Our town Mayor started the race with a 12-gauge shot gun, and I laughed at my Forrest Gump-like resolve to start running. Nipples at the ready, I decided on my race goals: finish in less than six hours and enjoy the experience. I would run when I could and speed-walk when I could not. I would sip from my Camelback every 15 minutes or so while taking in the beauty of the famed course.

Perhaps I’ll sip every 7 minutes, I began to think. I was immediately grateful that I had outfitted myself with the extra weight of water. I also knew—from my prodigious tread mill training—that if I could find a pace at which I could suck wind steadily, I could maintain that pace for many laps with no increase in suffering; I speculated that I could maintain a steady pace for the treadmill equivalent of 52ish laps. My pace was slow, but ah! The beauty that surrounded me!

Azure skies—punctuated by puffy cumulous clouds—outlined the surrounding snow-peaked mountains which drizzled down into the chartreuse covered hillsides; the hills dropped down into the truly turquoise lake, around which I vowed to enjoy my run. And for the first hour, it was relatively easy. With the sun at my back and a welcomingly cool breeze in my face, I tried my best to disregard the woman near me who appeared to be hacking up fur balls. The thought of offering her some of my water passed quickly . . . we all knew the course description and understood there would be no aide for seven miles. Must take care of self, I thought guiltily as I increased my pace.

I focused on the power of the deafening waterfalls to my left that proclaimed a new season in the mountains and found fresh new flower buds struggling to awaken. Sure, it was June, but why rush? While flowers at lower altitudes were already ho-hum, those tough treasures were ready to be eye-candy for passers-by.

Using my arms more to exaggerate my forward progress, I increased the gap between cat-woman and myself and came upon another runner. “Sausage fingers?” she asked, seeing me pump my hands as I ran. Laughter. In another hour I would start to crave scrambled eggs and sausage.

I started to feel like I had trotted significantly further than my “training” would recommend. My butt cheeks, which I had early dubbed “Thing One” and “Thing Two,” began to torment me; but I would have no Seussical shenanigans that day. Instead, I would focus my thoughts on higher things: our foremothers, Manifest Destiny, all those poor bastards who had to run/push/suffer to survive, and all without the miracles of Gu, Gortex, or Camelbacks. I refused to whine. And then, just when my uphill stride threatened to falter, a little miracle.

“Awesome power-hiking pace!” exclaimed a red-shirted man who had just caught me on an uphill stretch. Yes! That’s what I am, I realized. I’m not really a runner . . . I’m a POWER HIKER! I felt—at least for the moment—like a superhero. Then I reflected on how fortunate I was to have inherited such perfect genes.

My father, an 89-year-old ten-pin-bowling pro-crossword-puzzle-solving genius, can chill with the best of them. My mother, an 84-year-old still mother/grandmother/great-grandmother of many, pro-bargain-hunting genius, can cook/clean/entertain/shop and never drop. I managed to land the perfect mix of mellow and mania!

Despite what has become my lifelong quest for spiritual enlightenment, I panted an audible, “Thank you, God,” not only for my parents and their genes, but for the water point ahead which signaled the change from uphill pavement to rolling, pine-filled trails and a new view of the lake. The wind was now at my back, the ground was soft, and the ripples in the lake were flowing dizzyingly away from me.

All I had to do was remain upright and moving forward for five more miles, easier said than done with ankle muscles trying to roll over and sleep. Even though I felt energetic enough to run, I knew that if I turned my ankle on any number of loose stones or slippery roots, my “enjoy the experience” goal would be compromised, so I kept my pace between jogging and power-hiking while anticipating the finish line.

The remaining verdant miles passed quickly and I finally heard the hullabaloo back at the boat dock; there was just a quick sprint up a set of stairs and a cruel last lap around the parking lot before I could hear my hubby and friends—already rested from their far faster finish—hollering my name. I finished in less than 3 hours with a smile on my face.

“I tried to catch you,” a man about my age confessed at the water table. You can’t catch a superhero, I thought, chuckling. I knew I won’t be winning any trophies, but . . .

Raffle prizes! Not only was I not the last place finisher, I won a colorful athletic bra! “The girls” were happy, and much like teenage boys, were still ready for action. There was no use ignoring them. Forget hiding them. They deserved to be as proud as I was for accomplishing all I had tapered for that chilly Leadville morning!