I suppose it’s a good thing that my goal is to live to be 110 because after spending the last several hours cleaning my son’s apartment, I may inadvertently have sacrificed a year or two.

He didn’t ask me to do it, and he certainly didn’t expect that I would. We were supposed to be enjoying a merry old time tonight with a group of his friends who invited us for dinner and then an evening at the local indoor trampoline park. Awesome, right? Yes, I was ready to don a set of Nick’s sweats and hop till I dropped this evening, but an unexpected call from his workplace changed our plans, leaving me with four hours to entertain myself, and no cable television.

“I guess I’ll have some time to write after all,” I tell him as he hurriedly dresses to cover a shift. He looks great in his dress pants, shirt and tie, but cuts himself in his rush to shave.

“Why are you using a disposable razor?” I ask, knowing from personal experience how unforgiving they can be.

“I don’t know,” he says, pressing a piece of toilet paper to his chin. “A leftover habit from when I didn’t used to shave every day, I guess.”

If he could, he’d likely never shave, but his job now requires it. I make a mental note to buy him a real razor.

He leaves, and I open the refrigerator to rustle up some dinner. Looks like it’ll be a celery and peanut butter extravaganza, and when I open what should be the fruit drawer to see if there’s anything I might add, I recoil in horror.

No, there’s no severed head or any other body part in the drawer, but there’s clearly something growing, and not something anyone should eat. I decide that my young bachelor could use a little help, and set aside the celery for later.

I survey the small apartment and decide to start with the floors, drab beige-brown linoleum that almost hides months of neglect. After running the vac (note: buy new vacuum bags), I fill the tub with bleach water and search for a mop, but find only a dry-mop. Into the tub it goes, and I instantly feel better slopping it across each room and capturing all the dust bunnies.

The color of the tub water when I rinse the mop makes me think that I should repeat what I’ve just done, several times, but my time is limited and there’s much still to do. Like clean the tub, which is blooming both black and an unnatural pink. And the toilet, which rocks when you sit on it, and the sink, which is attached to the wall at the perfect height for a Lilliputian.

I look for a new sponge (note: buy new sponges), to no avail, so I use the one that keeps the bar of soap from slipping into the sink; it’s in considerably better shape than the scary one Nick has been using on dishes in the kitchen. My hands start to look like old lady’s hands (I’ve only just hit my middle-age) and I wonder if I should be wearing a haz-mat mask, but it’s too late. I’ve gone too far. 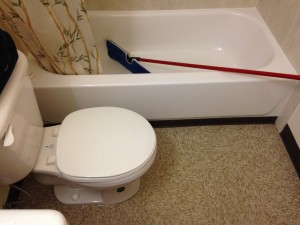 After dousing all bathroom surfaces with bleach (note: buy more bleach), I scrub what I can, including the abused trash can. Then it’s back to the kitchen. I open the refrigerator again, hoping that what I saw an hour ago isn’t really as bad as I first thought, but in fact, it is far worse.

When I remove the drawer to clean it in the sink, what I find under it at the bottom of the refrigerator defies description, and for a moment, I consider pretending I’ve not seen it. I could clean and replace the drawer, and no one would be the wiser. But then I wouldn’t be able to sleep. Ever.

And so I do what I must with a skanky sponge soaked in antibacterial spray (note: buy more antibacterial spray), and as the saying goes, one thing leads to another. I do my best not to breathe each time I go in for a scrub, but I start to hear the doctors’ dialogue when I’m 108.

“Poor old girl,” they say. “I’ll bet she cleaned her son’s refrigerator when she was just middle-aged. There’s no way she’ll make it to 110 now.”

Nevertheless, I know that I will finish what I’ve begun.

When all of the red-green gooey jelly-like substance is gone, I finish up by scraping a meal’s worth of food from the inside of the microwave and wipe down the stove front and hood. The sponge can handle no more, and my peanut butter celery is calling me.

I clean the kitchen trash can, toss in the mangled sponge, and scrub my flaky hands with the last drop of antibacterial spray. Time for dinner (note: buy more celery) and three, yes three brownies. Hey, I’m only going to live to be 108 now, so I might as well enjoy every moment!

Nick returns shortly after 10 p.m. and I note a brief expression of concern on his face. He senses that something is different, but cannot put his finger on it.

“Wow. I normally just carry the whole trash can to the dumpster. You were brave to pull out that flimsy bag,” he tells me when he sees the over-full bag by the front door.

I tell him just how brave I’ve been.

“Thanks, Mum,” he tells me, and I know that we both will sleep well tonight.

Maybe it’s because I grew up in a gaggle of women–four sisters, all their girl friends, and a mother who led the neighborhood coffee klatch (and more often the “Sip and Snip,” where the wine flowed as freely as the boisterous conversation)–but with my decision to leave Smith College for West Point, I soon discovered that I was as comfortable spending time with the boys as I was with my “own kind.”

“Do you think you would have done anything differently if you had had daughters?” a friend recently asked. Our husbands were competing in a 12-hour mountain bike race and we were discussing some of our life decisions and laughing about the countless weekends we’ve both spent in support of our men’s athletic pursuits.

The truth is that while I have gone out of my way over the years to force myself out of my own comfort zone–which is a dangerous place, I believe–I have had the pleasure of expanding both my horizons and my family. Beyond my own two sons (each as different in their definitions of “comfort zone” as my sisters and I are), I have willingly become the Mum/friend/sister of many others . . . and I love it.

I live in the best of both worlds. My sisters and I still share a lifetime of memories and laughter, the girl friends I have stayed in contact with from before, during and after our Army days are as precious to me as ever, and all the boys in my life–my stalwart father (and his bowling buddies who love it when I visit and bowl with their league), my husband and those who look to him for inspiration, my sons and their friends, my brother’s-in-law, my military friends, my teacher friends–provide a balance and a unique camaraderie that is somehow simply refreshing.

If I were the mother of daughters, I would want them to treasure the lifelong relationships they would have with those select women who would remain loyal till death, and to feel as comfortable, confident and happy as I have been hanging with the boys. 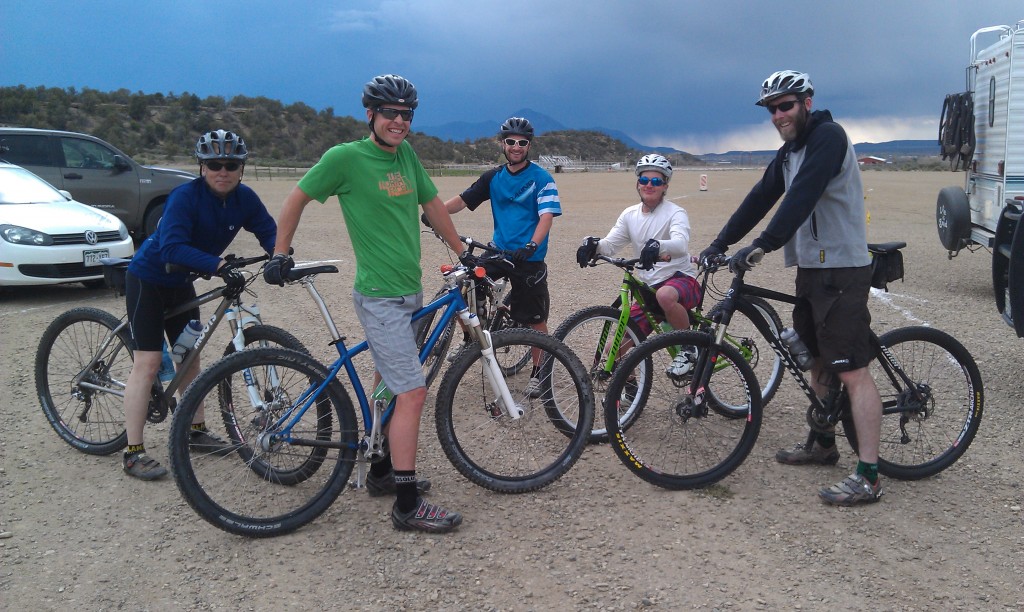