Do I really hate having to shovel day after day, sometimes for several hours, only to have my work undone by a city plow? Do I really hate having to bundle up on a -10 degree morning, ensuring almost no skin is exposed, to take my dog on his “time to go” walk, only to end up having to remove my hat and unzip because even though it’s freezing, the brilliant sun combined with the pumping of my blood is making me sweat? Do I really hate jumping into our Tempur-Pedic bed when the room temperature is hovering below 50, only to have my husband laugh at my “Ooof!” when I land on the brick-like surface before weaseling my way over to where his warmth has already created a snuggly cocoon?

And do I hate spending 20 extra minutes at Safeway because I know—and must chat with—someone in every aisle, or cleaning out the ashes of our wood-burning stove before starting a fire around which family and friends will gather, or having to walk to the post office instead of drive because it would be faster than shoveling out my car? 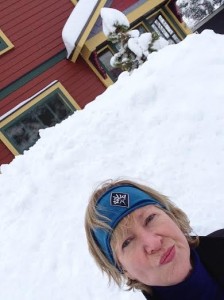 It’s funny, but I’ve been struggling with life in Leadville since well before we moved here nearly seven years ago. I often want to hate it, and sometimes I convince myself that I do.

But I really don’t, though I’ll never be fond of that city plow.

“We could turn around here if you want,” Mike says with just a hint of disappointment in his voice.

We’re not quite to the halfway point on the 3-mile Fish Hatchery loop, and our new dog, Ranger, is staging a peaceful protest. He sits in the snow staring at the pooch-booties on his paws—a gift from a friend—probably wondering why on earth “this family” rescued him from the shelter. He used to have it so easy, just laying around and getting fat. 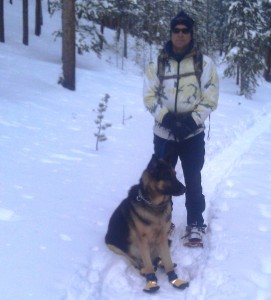 It’s 5 degrees out, much colder with the wind chill, but it doesn’t feel too bad in the trees. I look at my dog who looks at me, and know that I must make the right decision.

“Come on, Ranger, let’s go!” I say with great, feigned enthusiasm as I take the lead back on course. We must not turn around. The sun is peeking through the trees. It’s not even snowing.

“We can take a water break at the top of the next little rise,” Mike says, happy to be finishing what we’ve started.

It is only because I now take the lead that Ranger will stand up and follow. Although he loves Mike—the one who takes him out first thing in the morning and picks up his steaming “presents”—he loves me more.

Both Ranger and I enjoy a few sips of water at the top of the rise. I’m actually sweating in my $10 gold retro one-piece ski suit, and with snow shoes on for the first time this season I’m feeling like I understand Ranger’s disdain for his treadless booties.

“No way! Seriously?” he asks, befuddled.

“You know I always suck going uphill. It hurts,” I tell him, “but I didn’t turn around!”

Although I’ve lived at 10,200 feet for almost 7 years now, I nevertheless have not “gotten used to” the strain of breathing under exertion. Perhaps if I hit the gym more it would help, but even when I was doing that regularly, I still hated the feeling of suffering. In a recent Facebook status I confessed that I hate suffering, but love having suffered, which is why we did not turn around today when we could have.

Mike, who has recently had one complete hip replacement surgery and will put off replacing the other for as long as possible, looks at Ranger, who does not have the capacity to feign enthusiasm for continuing our hike. 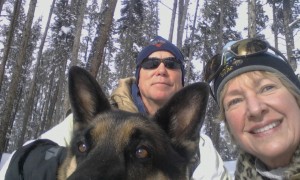 I laugh at Mike’s attempt at motivating our dog. Ranger just looks at him, looks at his booties again, then looks at me.

“We’re almost there, buddy!” I say, and although we still have a mile and a half to go, it’s all downhill. I’m actually happy now. I can walk forever if it’s not uphill.

We make it back to our car and Ranger is ready to jump in before the hatch is even up. I give him another treat—a trick my friend suggested as a way to get the booties on him—and all is right with his world again. 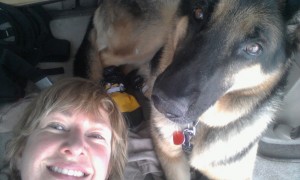 I remove the booties when we get home. Ranger’s feet are warm and dry.

We all settle down for a long winter’s nap.