I finished my novel in March, yet I’m still unsure of the final title. Will it be Melancholy Mondays, or will it be what I originally dubbed it, “Miss!”? Neither will matter, however, until I land the perfect literary agent.

My quest began as soon as I received feedback from someone in the publishing business who had an editor read my novel as a favor. The editor reported an “overall positive read” and suggested some edits, which I completed in April. “Hold off on self-publishing unless you cannot find an agent,” I was told, which I immediately translated into, “It’s marketable.”

Now that another month has passed, I’d like to share the process I’m going through so that when you find yourself in my situation someday, you’ll know a little bit about what to expect.

On May 7th I paid for a one-year subscription to Writer’s Market  (online version: $39.99) and started looking through the pages of agencies that represent my current genre: Literary Fiction. I made an initial list of names I liked (completely silly, but hey, I had to start somewhere). For each agency I followed their specific requirements for new submissions, and noted the name and submission date in my steno book (all while still in my fuzzy fuchsia bathrobe). 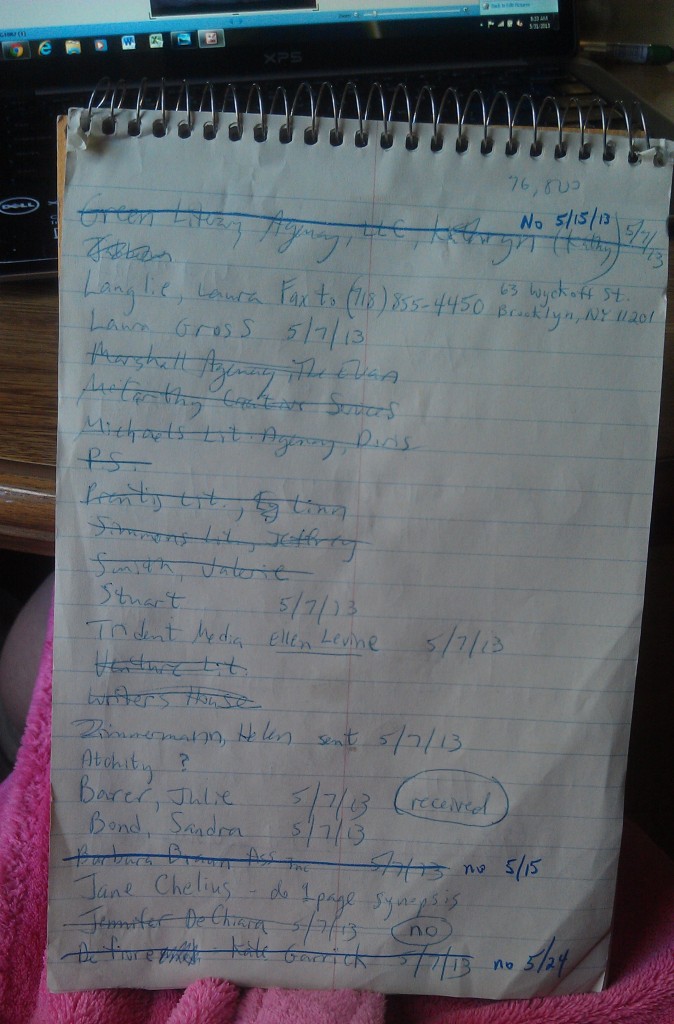 By the way, does anyone even know what a stenographer is anymore?

Before midnight on the 7th I sent out 10 query letters (and anything else the agency requested, i.e., the first 3/10/25 pages copied and pasted below the query letter). For online submissions, agents WILL NOT open attachments, so don’t attach anything!

Within a week I started to receive my first “thanks but this is not for us” responses. After the first one (which made me want to gnash my teeth and rock in a dark corner somewhere because it had been from an actual referral), the rest were much less painful, and now I find myself anticipating with pleasure whatever the next response will be–because I know that one of them will come back with, “I’d like to see more.”

After sending out another 8 letters (this is a tedious process, because at each agency there may be several agents, and you must read all their bios and submit to only one), I decided to have my query letter evaluated by a pro. I probably should have ponied up the $42.75 before I sent out any letters, but after reading through countless articles about “What to put in a query letter,” I thought I had the perfect product.

Hubris? Me? Who woulda thunk it.

On May 26th I sent my letter to a Writer’s Digest representative, and with the feedback he provided to me today, which included a more engaging template based on the letter I provided to him, I revised my query letter and sent out four more submissions today, May 31st.

Meanwhile, my wonderful husband and constant source of encouragement–Mike–suggested that I might want to upgrade my steno method of data collection and create an Excel spreadsheet, which I have done. 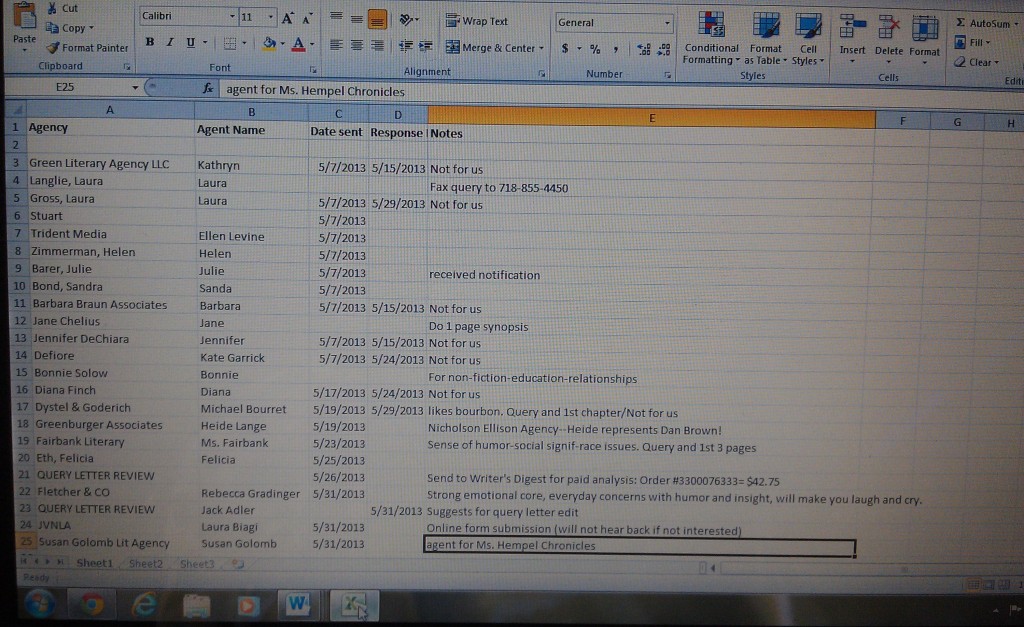 This will allow me to see more clearly what’s still out, and I can include any special notes for future reference. If I should get a “no thank you” from one person in a multi-agent practice, then I might want to query another at the same agency.

I also learned today that with my Writer’s Market account I can access a tracking tool, but I haven’t yet explored that. When I do, I’ll let you know if it’s better that creating your own spreadsheet.