When I look out to all of you gathered here to honor Dad, I wonder if there is really anything I could say that you wouldn’t already know. My family decided that the favorite daughter should speak today, however, and so I am here . . . speaking on behalf of all five of Dad’s favorite daughters and his most favorite girl of all, our Mom. They didn’t tell me how much time I had to speak, but as Dad is in no hurry today, I hope that you will bear with me.

Time is such a nebulous thing. We spend it, pass it, curse it, measure it, share it, and yet it remains something we can never grasp.

My sisters and I have spent a lifetime hearing how lucky we are to have the kind of family that people wanted to be adopted into, and whenever I hear the word “lucky” now, I remember Dad’s instant response.

“It’s not luck,” he would say, joking about much hard work it took to raise five daughters, however perfect we were. No, not luck. He would call it a blessing . . . and lots of hard work!

From the time we were all very young, Dad was a stern disciplinarian, a trait that would soften as he became confident that each of us would be well cared for by the men who would eventually claim us as their wives. At times he was even feared, not in a frightened way, but in a respectful way. His standards were high and no one wanted to disappoint him. He and Mom taught us how to be acceptable in public, from having us cater the many neighborhood parties they would host to sitting up straight at the dinner table. I know that those lessons made eating my meals at West Point that first year far attention-provoking, and that was a good thing!

I’m pretty sure that although we never wanted to, we all might have done things to disappoint him along the way. But there was never a time that we felt he did not love us.

“Good morning, beautiful,” I remember him saying on many occasions, perhaps because he couldn’t remember our name or even our “daughter number” first thing in the morning. I like to think he only said that to me, but even though I know that wasn’t the case, it always made me feel special.

We daughters know that he loved us and that he loved his bride of 65 years even more. His devotion as a husband, and Mom’s as a wife, made the two of them role models for many and inspired each of us to believe that the same could be possible for us. Michelle, who wishes she could be here this weekend, mentioned how Nana and Grandpa were always inseparable. There was never a Nana without Grandpa, a Mom without Dad, a Pat without Charlie.

Dad was a man of few words, no doubt because he could never get a word in edgewise with his chatty women and all the friends we would bring home, but he sure did love to laugh; and even more, he loved to make others laugh. He had a joke or funny story for every occasion and could time a zinger so flawlessly that his audience might never see it coming!

Dad was a selfless man who sacrificed much for those he loved. He worked for over 42 years at AT&T while sticking with his Army Reserve training which ultimately ensured a comfortable retirement for Mom and allowed them both the time and means to travel the world with friends and family, and to be there for whichever daughter needed them the most. I don’t believe they missed a birth of a grandchild, and were there to help several us more than once with major relocations. I cannot imagine that any of you in the audience haven’t been the beneficiary of Dad’s generosity in one form or another.

In addition to his host of loyal friends, Dad leaves behind a wife and woman stronger than any of us had ever anticipated, five nearly perfect daughters—each of us his favorite—with our husbands and our twelve children, five great-grand-children with a sixth due on what would be Mom and Dad’s 65th anniversary week (that would be why Michelle could not make it here this weekend), two sisters-in-law, six nieces, two nephews, some cousins, and a partridge in a pear tree.

We each will have our own unique “remember whens” to share in years to come, even though many of us have shared the same experiences. Family trips to Florida, to the Cape, to Nantasket . . . 7 of us in a station wagon with no seat belts! Mealtimes with him telling us in what order to eat the items on our plates—I’ll bet every child and grandchild remembers that!

“Eat some peas next, and then some potatoes, and then have some meat!”

I will remember him kicking my butt on the tennis courts in my high school days, offering his retirement savings so I could attend an exclusive school, visiting me wherever I happened to be in the world—be it Korea or Leadville, rocking my children to sleep, driving us to exotic places, dancing with mom on the cruise to Bermuda, feeding the men at the shelter, reading the names of his fallen peers at Memorial Day services, bowling with his candlepin buddies—and occasionally even winning $2, waiting to win the Lotto—probably with the goal of being even more generous to those in need, breakfasting with his friends at Easter’s, completing crossword puzzles with his Dewar’s close by, almost never missing his other favorite girls on “The Five,” and belly-chuckling over Mom’s dance routine story, even though he’d probably heard it a dozen times.

Dad wasn’t perfect—none of us is—yet his intentions always were, and certainly his love for his God, his family and his friends. He was a man of unshakable faith, unquestionable integrity, unbounded love, and in his own words, he wanted people to remember him as “serious, but humorous.”

A couple of years ago when I asked him how he felt about dying someday—I’m the reporter in the family—he smiled and told me that he would be happy to see his Mom, Dad, and little sister again, not knowing that he would also outlive his younger brother. He said he wasn’t afraid of death, but that he hoped it wasn’t time yet because he wasn’t quite ready to go. Recently he added that he’ll be happy to meet the son he never had and the older brother who spent only two days on this earth.

Ever the good soldier, Dad did what his doctors recommended, probably wanting more time—to attend the next wedding, to hold the next great-grandchild, to learn just one more word, and to share one more dance with Mom.

When Dad found out that the cancer had returned, though, and there was nothing more to be done, he stopped winding his favorite clock.

Although each of us may interpret his act in different ways (I, of course, want to think he was giving me a theme for tying together this tribute), I would like to believe that Dad finally decided it was time to live entirely in the present and to stop measuring what was passing. I even witnessed—and this may shock some of you—when he tuned out “The Five” on Fox News to spend time with a visitor!

I believe that we were all blessed with time to prepare for Dad’s next journey. Yes, we will still mourn—when we’re spending time together and waiting for his next joke, when our phone rings and we see “Mom and Dad” on the screen, when we attend the next Memorial Day service—but we will also share time rejoicing that each of us was influenced in some great way by our relationships with this generous man.

And how could any of us be sad for very long having experienced the gift of a transition time in Carol and Michael’s beautiful home where visitors and family could gaze upon the setting sun while Dad, not as interested in the scenery, could gaze upon each of us in the light of those setting rays?

Dave Sargent, Dad’s Aide-de-Camp and our adopted brother, observed that Dad was doing as much for us in his last days as we were for him, acting as if nothing were wrong, greeting everyone with a “Good Morning” whenever he woke up, regardless of the time of day, and thanking everyone for even the slightest kindness . . . a pillow fluff, a cup of tea, a gentle foot massage. He did his best to help the wonderful nurses and Hospice folks who came to help him during his last weeks.

I wonder why it is that we want to cling to the last words uttered by those we love, as if they will somehow be more significant than the lifetime of words leading up to them? In any case, I remember some of Dad’s last words when I asked him how we should celebrate his upcoming 90th birthday. A bit confused at first, remembering the joyful combined celebration we shared with family and friends just this last June at Carol and Michael’s, he said that if he makes it to his actual 90th birthday, he would like to have angel cake and dance to WJIB.

Now that Dad has left us, the time has come for those he left behind to sit up straight, to celebrate his life, to treasure his memory and to continue creating more of our own memories. Thank you all for the time and the love you have shared with our Dad. 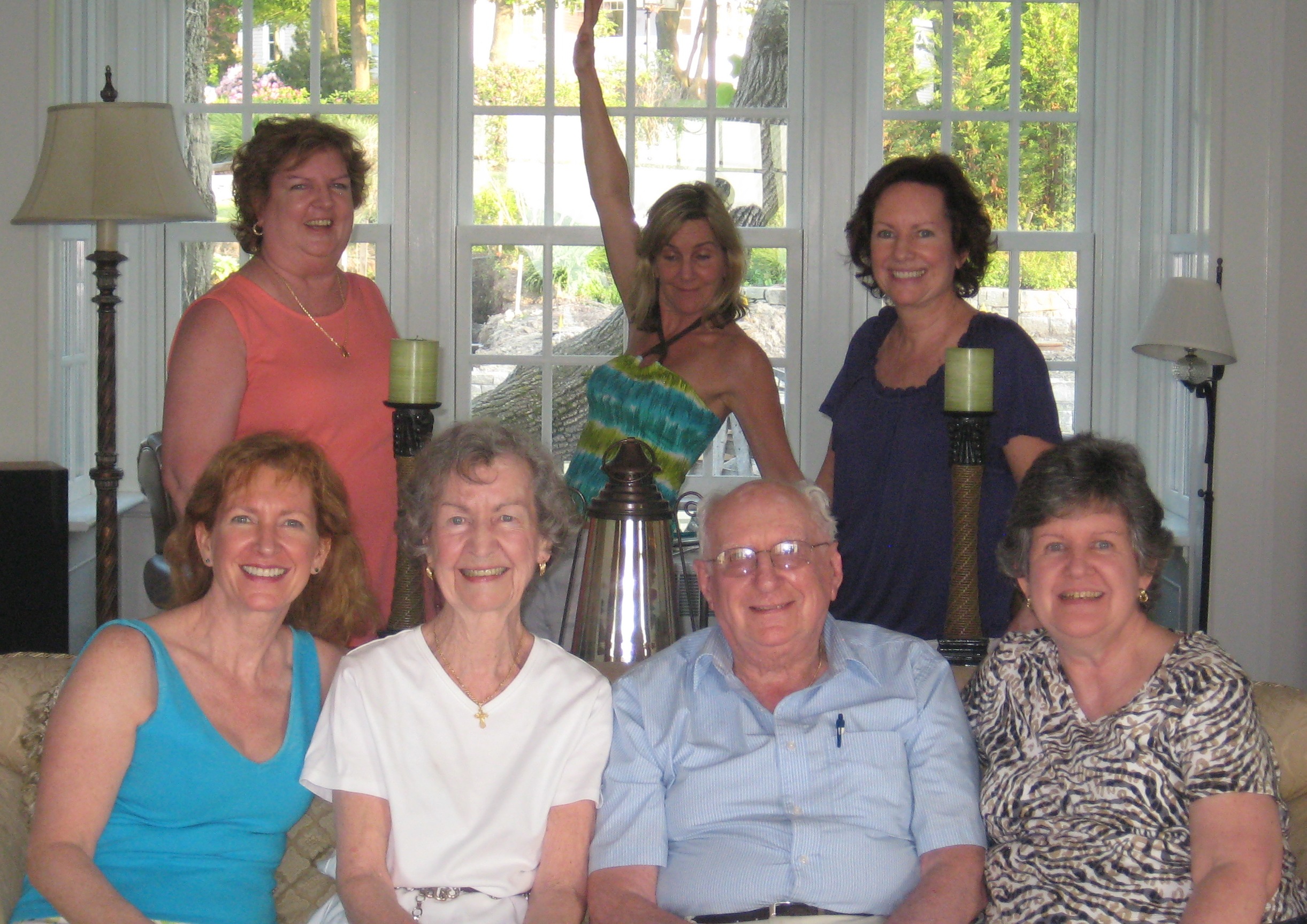