Here’s my epilogue
They were somewhere, I was naught
Never heard a herd

Although I never pulled the trigger, no one can say I didn’t give it my best shot. I ended this hunting season as I began it—elkless—but richer, still, for the experience.

Mike and I watched another magical morning bloom across the sky as we moved through our last hunting area of the season. Knowing that this was our last day, my last chance to do something I’ve lost sleep over these past several weeks, we walked more slowly than ever. Even so, the “scrunch” of dry snow and ice under our boots was too loud. 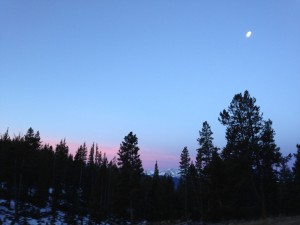 We agreed that if we saw nothing this morning, we’d call it quits for the day. We whispered little. When we did, it was the usual, “This would be a great place for them to hide,” followed by, “Yeah, I know, they should be here,” followed by, “They’re probably peeing on our car right now,” followed by muffled chuckles. It really was comical, or sad, depending on your perspective. I’ll go with comical.

Day after day of prodding poop piles (a band name, perhaps?) made me recall a story my dad used to enjoy telling, the one about two little boys sent to play in a room filled with horse shit for a day. When they got home, the mom asked about their day. One boy cried and complained about all the poop. The other boy gleefully exclaimed his willingness to return the next day because “with all that horse poo, there must be a pony in there somewhere”!

The only real “signs” we saw today, however, were signs of disrespectful hunters, and 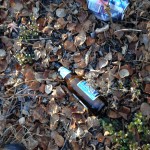 that made us both angry. I’ll never understand why anyone would think it’s okay to leave beer cans and bottles littering the outdoors. I hoped they went home elkless as well.

When we reached the farthest point in our search, it was time to head back home. We both decided there was no need for stealth, and had we been the hunted, we would have made easy targets. It was a bizarre thought, I know, but it did cross my mind as we hustled back noisily to the 4-Runner. Too many “Hunger Games” movies, I suppose.

By the time we returned home, I decided I would return to a close-in site for the last few hours of the day.

“I’ll go by myself,” I told Mike, not wanting him to feel obligated to watch the ball drop, so to speak, on my first hunting season.

“Why would you do that?” he asked. “Of course I’m going with you,” he continued, looking at me as if I had grown an extra nose.

So without going into the step by step details, the most exciting moment of the evening was when I caught movement in the trees behind us. I spun around and put my scope on the biggest rabbit I have ever seen. 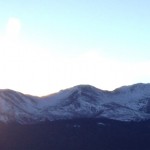 “Don’t shoot the rabbit with the .308,” said Mike matter-of-factly.

“Oh, but…,” I protested. The sun was disappearing over the mountains and I was hungry. And did I say it was the biggest rabbit I had ever seen? It wasn’t elk-size, of course, but it would have made quite a stew.

I sure did want to end my hunting blog with a thrilling conclusion and photos of me elbows deep in the guts of my first kill. But it just wasn’t meant to be.

I did, however, confirm what we have known all along…that those wily beasts have been following us…and laughing. 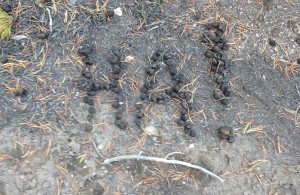 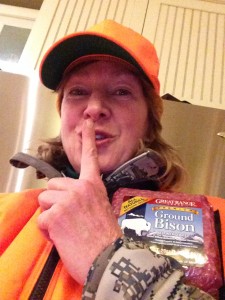