Great. Now the word “potato” doesn’t look right to me.

About two months ago I discovered three nasty old shriveled up potatoes in a cabinet I rarely open. Despite their condition, however, each had 4” sprouts. Since I had never tried to grow potatoes before, I carried the ugly tubers to my computer and did a little research. Twenty minutes later, they were planted in one of the raised beds Mike built out back several years ago. They were the only things I planted this year.

Growing food can be difficult in a place where the number of warm days is inversely proportional to the ridiculous requirements added to teachers’ plates every year. Still, I’ve tried not to look too closely during walks past yards with haystacks and greenhouses and vines burdened with fruitful bounty lest I become covetous, or worse, insecure. I knew I could have harvested weeks of lettuce, spinach, beans and radishes had I planted seeds earlier in the season. In prior years, I was excited by my success with those plants, and I remember inviting our neighbors’ 3-year-old girl to pull up the first radiantly red radish.

“Lollipop!” She said, and her face lit up.

But since then, I haven’t made time for dirt. Sticking those spuds in Leadville’s still-cold June ground was an act of reconciliation. I’d be able to say I “did a little gardening” this year, though that would be a stretch to the truth. Sure, I did keep the earth mounded around each ridiculous shoot as they showed signs of forcing out buds, and I did stick the hose over the fence to sprinkle moisture on random rainless days. But I can’t really claim I nurtured those three nearly dead potatoes.

Yesterday marked about 10 weeks since I started what was really just an experiment. The plants that had grown vibrantly green despite my neglect were beginning to fade. It was time to see if there were any hidden treasures beneath the surface.

Imagine my surprise when my fingers struck the first cool sphere! 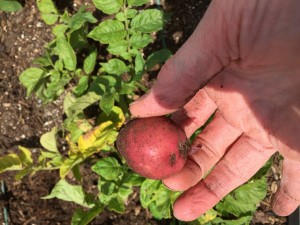 “Lollipop!” I announced to Mike, who was splitting wood for our soon-to-be-used fireplace. Triumphantly I held up the first perfect new red potato. I didn’t remember the shriveled things I had planted being red, but I suppose they could have been.

With growing excitement, I felt around for more. And when I was done, Mike and I had a good laugh. I sent a photo to our son Jake, who replied with one word: “Sustainability.”

My simple experiment took my brain to strange places and made me realize it was time to reconsider my will, and not the one that gets me through the long, cold months of Leadville’s three winter seasons. I’m actually not sure of the existing wording as it was completed too many years ago, but I know I opted for cremation. And while Mike remains steadfast in his wish that his ashes be scattered atop Mt. Massive (and in my Dad’s words many years ago when we discussed his remains, “but not until I’m dead!”), I’ve always considered myself more of a water person.

I still laugh with my Mom about threatening her with someday bringing her ashes to Leadville. “Don’t you dare!” she said the first time I mentioned it. “I won’t be able to breathe up there!” And then she threatened to haunt me if I did, something I hope she will do anyway, though not too soon.

So I don’t want my ashes tossed over a mountaintop. And although I wouldn’t mind having them sprinkled in a crystal-clear Colorado lake or in the ocean—and any one would do just fine—I’ve found an idea I like best.

Years ago I saw an ad for turning your loved one’s ashes into art. Just mix the ash in clay and create, or have someone create, a sculpture (which, I believe, would then need to be “fired” once more). And I thought that was a great idea until recently, when I looked around my house and realized I had too much “stuff.” Artwork is wonderful, but eventually, someone inherits it or it gets auctioned off or stuck in a closet or . . . who knows where it ends up.

And I know I’m starting to sound really picky right now, but hey, I’m sharing with the world my final will and testament about my cremains, so I think it’s my right to be specific.

I want my ashes to be buried in one of those new biodegradable containers that will produce a tree. “Ashes to trees, dust to the desk top.” I think that’s how it goes. And I want to grow somewhere with a longer growing season than Leadville’s. Maybe I’ll be a maple tree back near my New England hometown. Those fall leaves were always my favorite. Or, I suppose, a Laurel tree, though I hear those may be pickier about where they want to live. In any case, I’d like my cremains buried with—or even scattered around—a pretty new tree.

Phew! I’m really glad that’s settled. I’m looking forward to boiling my handful of potatoes for dinner tonight. And now I should probably investigate what else might lurk in that cabinet I rarely open. 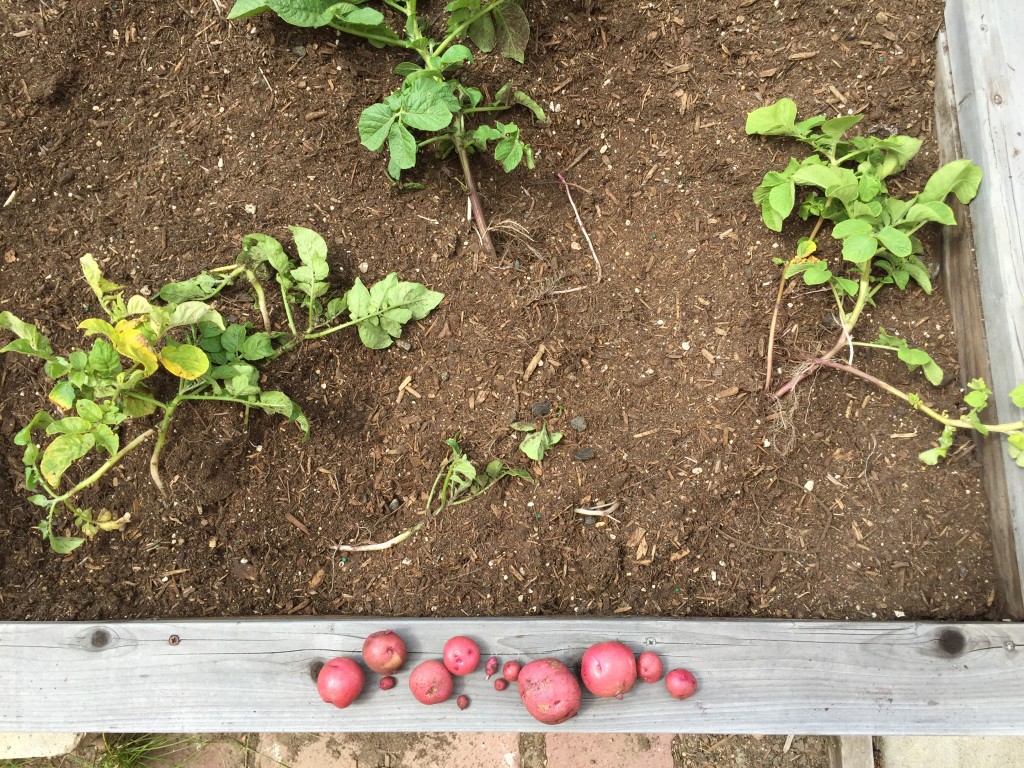